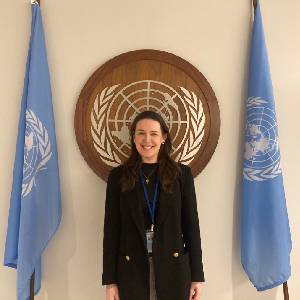 Alumni: from MIMES to the UN | Ora's story

Ora Duffley, MIMES 2020/21. Read her enthusastic report of how she lived and succeeded in the Master in Middle Eastern Studies, despite the difficulties of having attended during pandemic times.

The MIMEs program at Cattolica provided me with an opportunity to not only engage in an intensive study of the ‘cradle of civilization’ to give thoughtful consideration to the complexities and commonalities of the Middle East region but also prepared me for taking a front-row seat during deliberations on global and regional matters in the corridors and conference rooms of the United Nations in New York.

For an aspiring Master’s student who joined ASERI from a background in education and humanitarian action, the Specializing Master in Middle Eastern Studies fulfilled a long-held goal and opened the door to continuing professional endeavors in the field of international relations.

A cross cultural program and an extrordinary Faculty

With a strong personal belief in the merits of cross-cultural exchange as a spark to ignite and achieve peace and prosperity, I found in the interdisciplinary features of the MIMES programme and its international team of lecturers, an opportunity to study the region not only from an academic perspective, but to also embrace a regional language and participate in a meaningful internship.
During a very intensive year of remote learning, in the middle of a global pandemic and across many time zones, my cohort and I were supported by a wonderful team of professors at the ASERI School of International Relations, many of whom are from, or are based in, the MENA region. Our teachers extensively presented us with material and concepts that challenged our perceptions of the region which we explored from a historical and contemporary lens – culturally, socially and politically, that stimulated the analysis of  past decisions, current realities and future predictions that shape and impact the region.

For a student specializing in the Middle East, whilst living in an ever-changing world, the past few months working at the United Nations in New York with the Permanent Mission of the Hashemite Kingdom of Jordan to the UN has afforded what can only be described as an enriching and riveting experience.
Immersed in a forum that welcomes all the countries of the world, that seeks to address all the issues faced by our global population, that seeks to promote harmonious development, has indeed been a unique opportunity indeed.
Prior to my studies I have enjoyed the warmth and vitality of Middle Eastern culture, but I have also seen the devastation of conflict, among other challenges that face the region. Notably, as an intern with the Jordanian Mission, I have observed the particular role played by Jordan as positive force and a very engaged bridge-builder both at regional and global level. Under the vision and leadership of His Majesty King Abdullah II, Jordan is deeply commitment to the advancement of peace, progress and prosperity for all.
At the UN, the diplomats of the Kingdom of Jordan, alongside representatives from all corners of the world, engage at multilateral level at UN sessions on a myriad of issues, maintain cordial bilateral relations and participate in regional groups. The principles that underpin the pillars of the UN Charter and the pursuit of the common goals of peace and security, sustainable development and human rights of all guide deliberations.

This year and a half of study has a two-fold merit. The foundation and formation during the Master's programme opened up a rich vista of deep academic learning, theoretical approaches and a practical understanding, that prepared me to embark on a successful internship in New York. The strong mentorship and positive encouragement that I received from Jordanian diplomats, particularly my mentor Katherine who guided and supported my efforts deserves sincere thanks.
So, with a determination to humbly expand my knowledge and develop my diplomatic skills, I dedicated my energies to exploring the complex realities facing the region in a globalized world through the lens of the Permanent Mission of the Hashemite Kingdom of Jordan.  I learned how the UN as the representative entity of the world’s people through its many affiliated organizations seeks to utilize this multilateral forum to hear the voices of those people in order to achieve the common good for humanity. What I also learned is that the UN is a big ship, change takes time, and patience is a virtue that diplomacy requires.
It has been an honour to join the Jordanian Mission to participate in this work and understand Jordan's unique role as a Member State that belongs to a region that has long, perhaps too often for the wrong reasons, taken centre stage at the geopolitical crossroads of international affairs, in the UN Security Council. Yet, the Hashemite Kingdom of Jordan consistently pursues fraternity and peace in a tough neighbourhood.
Whilst working on a range of committees, I have developed a broad understanding of the inner workings of UN Member States as I covered the Second Committee on climate and sustainable development, the briefings by UN Secretary-General Antonio Guterres on Our Common Agenda, on urgent issues of migration, the debate on reform of the UN’s institutions, the Peace and Security portfolio and the important issue of Nuclear Disarmament.
During my time here, I have deepened my understanding of the unique opportunities, challenges and dynamics of diplomatic work in the multilateral context and Jordan’s role as a global innovator on many vital issues, and for the MIMES student with a background in humanitarian work in the MENA region, this experience has been incredibly enlightening.

Having now completed a well-received thesis on ‘The impact of ISIS on areas traditionally considered the core of Christianity in Iraq’ and with a highly successful internship experience under my belt, I can proudly celebrate a Master in Middle Eastern Studies has been well and truly earned. As I continue my career in international affairs, I will build on the foundation to be given through this Master's Programme and step forward with confidence as a proud alumnus of Università Cattolica.