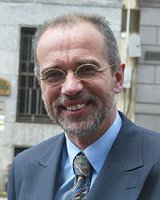 Prof. Fassa holds a degree in Philosophy (1981) and Law (1987) at Università Cattolica del Sacro Cuore, is a Supreme Court lawyer and professor in Gallarate.

As an Italian Member of the European Parliament during the fourth legislative term (1994-1999), he was vice-chairman of the Committee on Development and Cooperation, member of the Joint Assembly of the Convention between the African, Caribbean and Pacific and the European Union (ACP-EU), head of Delegation in Mali (1995, 1997) and in Cote d'Ivoire (1997).

Public policies of the European Union
The course has a decidedly "practical" cut. The premise indicates the fundamental characteristics of the EU, highlighting the fact that it is an absolutely "new" political institution. That is, the EU cannot be traced back to the traditional categories of the modern state. Subsequently, we analyze some concrete aspects of the action of the Community institutions, often ignored by public opinion, yet such as to have a strong impact on the lives of citizens: in particular, the Union's policy towards organized interest groups, common security policy, development cooperation policy (indispensable tool for 'dialogue between civilizations'). All this, with a view to recovering the "instrumental" notion of political institutions, in accordance with both the principle of subsidiarity and the social doctrine of the Church.