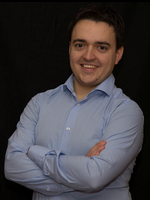 He graduated in Political Science and International Relations at Università del Sacro Cuore, Milano, where he later obtained the Laurea Magistralis in Science of International Relations, (awarded "Gemelli Prize", Graduate of the Year, Faculty of Political Science). He obtained the Master of Science in Political Science and Political Economy at the London School of Economics and Political Science (UK) and the PhD in Institutions and Politics at the Università Cattolica del Sacro Cuore, with a thesis entitled: Democracy, Institutions and Growth. Exploring the Black Box. After being Post-Doctoral fellow for the disciplinary field Economic Policy (SECS-P/02), from 2013 to 2017, since January 2018 he is Assistant Professor in Economic Policy (SECS-P/02) at the Faculty of Political and Social Sciences, . He is a member of the Research Center on Cognitive Sciences and Communication (CSCC). He has collaborated with public research institutes and carried out consulting for private companies.