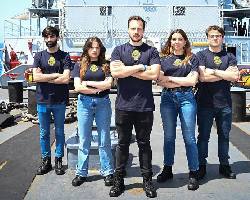 Four UCSC students on board the Italian Navy

A month on board an Italian Navy ship, immersed in crew, command and service staff. A fictitious geopolitical scenario, with an Italy divided into four zones, some inspired by the principles of democracy, others driven by authoritarian intentions. One mission: to safeguard international law, containing the threats of invaders. No contact with the mainland. It is in this context that Mare Aperto 2022 took place, the Navy's largest exercise, which the Catholic University also joined for the first time.

From 3 to 29 May 2022, in fact, four students from the Faculties of Law and Political and Social Sciences, tutored by our Nicolò Ferraris (Coordinator of the Master MEPIN), took part in the initiative as interns. For that time, the Etna Supply Unit turned into their home, the other three hundred people on board into their housemates. The strangeness of the context on the ship was added to that of the surroundings, because the waters in which they sailed were not those of the usual and real Italy. No longer twenty regions, united under the sign of democracy, but four independent territories struggling with each other: Enotria, the champion of international law and corresponding to central Italy; Arethusa, an authoritarian state equivalent to Sicily and Calabria; Shardana, an unstable territory in southern Sardinia and threatened by the north of the same region, known as Cadossene.

What were they doing onboard?