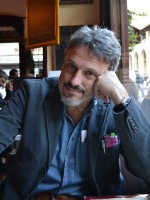 He plays as "Centre" in the "Veteran Team" of Rugby Monza and is member of the Italian Navy Reserve, with the rank of "Commander".

Governance of the global system