Towards a bubble democracy?

In the last few years, different hypotheses have been formulated to  explain the success of populism, focused on socio-economic factors  and on the ‘cultural’ components of the crisis of western liberalism.  However, the discussion often turned to the unpredictable evolutions  of “digital swarms”, to their indifference towards rational arguments,  to their inability to distinguish between truth and falsehood. 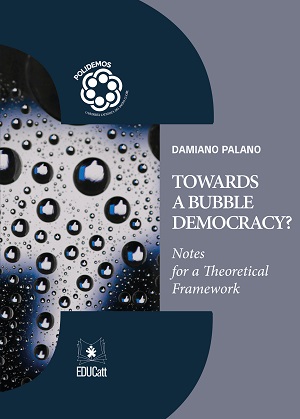 Damiano  Palano’s  book  focuses  precisely  on  the  consequences  that  “digital  swarms” can have on our democracies. The goal is, however, not to  provide an explanation of the success of the ‘new’ populism, of fake  news or of the so-called “post-truth”. More simply, the aim is to up- date the theoretical vocabulary with which to interpret the change we  are experiencing. This book – which must be read as a piece of a re- flection in progress – focuses in fact on the implications that the new  communication scenario has on contemporary democratic regimes.  The thesis is that we are facing a new context, very different not only  from the ‘old’ party democracy, but also from the audience democracy.  In many ways, the spread of social media seems in fact to mark the  decline of the “audience”, at least if it is understood as an audience  made basically homogeneous by the existence of ‘generalist’ commu- nication channels. Rather than actually sanctioning mechanisms of dis- intermediation, the spread of new media triggers a fragmentation of  the audience into a plurality of segments that tend to have no roots in  a common sphere. And so, the public sphere is transformed into a  myriad ‘bubbles’ that become largely self-referential and potentially  polarized. Taking into account the transformations in the communica- tive scenario, as well as the implications on the relationship between citizens, information and parties, this book proposes the ideal-typical image of a new bubble democracy.

The Ebook an be downloaded here