The Liberal World Order and Beyond

The Liberal World Order is in a state of upheaval. Not since the 1930s has cooperation been so under stress in all 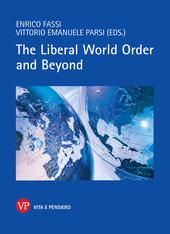 the major areas of the global system: trade, finance, arms control, alliances, human rights, health, environment and global commons. Moreover, liberal internationalism is threatened both by the increasing assertiveness of illiberal powers – notably China and Russia – and by political, economic, and societal developments within the West itself. The preservation of an ordered environment in which liberal democracies cooperate for mutual gains and protect their way of life is a key goal of the current order. Yet, it seems to have lost connection to the everyday lives of ordinary people, and also of parts of the political élites.
How did we get to this point? Why is the Liberal World Order in crisis? What are its future prospects? The book The Liberal World Order and Beyond tackles these questions focusing on some of the concepts and principles that inspired the establishment of the first Chair in International Politics at the University College of Wales, Aberystwyth, in 1919, including multilateralism, free trade, the limitation of war, self-determination and democracy promotion. An international group of scholars debate these issues from different perspectives to offer a composite picture of the establishment, evolution and potential future trajectories of the Liberal World Order.